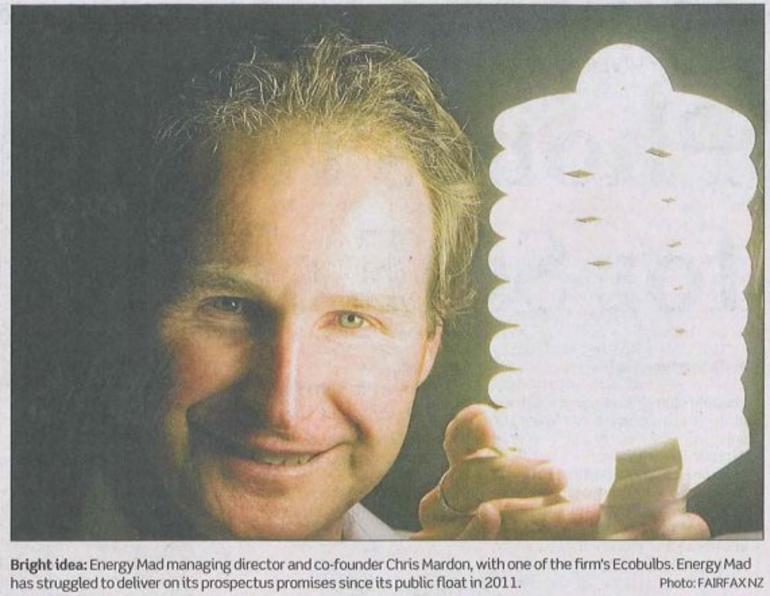 OPINION: After raking through a documentary dustbin, Chalkie pieces together an eye-opening tale for startups venturing across the Ditch.

You can see why the appointment looked a no-brainer. For a small Kiwi technology company trying to break into Australia, who better to have on your side than a former senior politician, ex-Treasury adviser, founding director of Macquarie Bank and professor of economics to boot?

And John Hewson, leader of the Australian Liberal Party from 1990 to 1994, nicknamed the "Feral Abacus" by Labor Prime Minister Paul Keating, had the kind of connections lightbulb-maker Energy Mad wanted. He joined the Energy Mad board in July 2006 and quickly put his network to good use, opening doors at utility AGL, where his ex-wife Carolyn was a director.

"John Hewson had a lot of contacts throughout the utility network in Australia, and he got us into AGL," says Energy Mad co-founder and managing director Chris Mardon.

But events were to take an unexpected turn.

We'll come back to Biswas and Logaraj shortly, but after a share consolidation just before Energy Mad floated on the NZX in mid-2011, Capital Trading had 3.125 million shares and Hewson had 2 million.

According to Energy Mad's initial public offer prospectus, Capital Trading paid $5 million for its shares, while Hewson paid nothing.

That was the deal, says Mardon.

"When we were starting out and trying to raise capital, effectively with both those directors [Hewson and Biswas] we couldn't pay them much, so we basically gave them incentive targets and said if they could raise a certain amount of capital at a certain price we would issue them with shares."

Hewson's shares were therefore issued as payment for his services. At current market prices, 2 million shares would be worth about $700,000.

In its accounts for 2007, Elderslie noted Hewson's interests in Energy Mad and says the Capital Trading deal was done on normal commercial terms.

There is no suggestion this wasn't the case, but unfortunately Elderslie was not in good financial shape and in July 2008 receivers were appointed. At the time, Elderslie owed A$148.7m (NZ$183.35m) to debenture holders. Last month A$129.6m was still owing.

The strife naturally led to Australian media scrutiny of Elderslie's transactions, including its investment in Energy Mad and its personal links to Hewson. Hewson has consistently declined to comment on the matter, going so far as attempting to injunct The Australian newspaper in 2008.

In 2010 Elderslie's liquidator, Nicholas Crouch, launched legal action against its directors, including Hewson, alleging insolvent trading, preferential payments and breach of continuous disclosure obligations. The lawsuit was settled out of court on confidential terms.

When Chalkie asked Hewson last week about Capital Trading and Energy Mad he said, "I know nothing about that, mate. Sorry, can't help you," and hung up.

Hewson left the New Zealand company's board in February 2008.

"We asked him to [go]," says Mardon, though he didn't specify why.

The formal path to Elderslie's receivership did not begin until April that year when its trustee appointed PricewaterhouseCooper as investigative accountant.

Capital Trading's receivers finally sold its 3.125 million Energy Mad shares last month to New Zealand fund manager Superlife. The price was not disclosed, but at the then market price of about 40c the sale would have realised $1.25m.

But what of Biswas and Logaraj?

Logaraj was issued 1 million shares in a deal linked to the Elderslie capital injection, says Mardon. The lawyer and professional director, who served on Elderslie's board for less than two months from November 2006, was apparently appointed to carry out due diligence on Energy Mad on behalf of Elderslie's owner Peter George. The shares were relinquished in November 2007 for nil consideration, says Mardon.

Logaraj doesn't feature much in the public arena, although the Australian Financial Review in 1994 reported his part in an extraordinary ruling against nine partners and former partners of law firm Baker & McKenzie by the Supreme Court of New South Wales. In a case involving several indebted racehorse syndicates, the court ordered the nine, including Logaraj, to pay a collective A$3.5m.

Of Logaraj, Justice Rolfe said he gave evidence that "not only reflected upon the reliability of his recall, but upon his reliability as a truthful witness."

Meanwhile, Biswas remains a shareholder in Energy Mad through his Queensland registered company Mingela, but quit the lightbulb company's board in August 2009 at the controlling shareholders' request, says Mardon. Again he didn't say why but indicated it was for similar reasons as Hewson.

Calcutta-born Biswas met the Energy Mad team when they were looking for Australian help in 2006 and was instrumental in introducing them to Hewson.

At the time, both were directors of now-defunct Queensland company Imagination Group.

It's not clear what else Biswas was able to do for Energy Mad and by 2009 Biswas had formed a boutique investment firm called Winteray.

According to reports in The Australian, Winteray made an impact in the wrong way by failing to deliver on promises to provide finance to clients, including Christopher Chronis, licensee of the global Playboy brand.

Winteray also appeared to be using the services of a convicted Melbourne fraudster, Phillippe Barros, who in 2008 was also banned from acting as a director for five years by the Australian Securities & Investments Commission for, among other things, using his position as a director to remove money from a company for his personal use.

Biswas told The Australian: "Does it concern me to do business with [Barros]? We assess opportunities on merit. Our last two investments were unassociated with him. Just because he sat in on a ... meeting doesn't mean he brought the opportunity to us."

To digress momentarily, Barros had no association with Energy Mad, but seems an unusual character to sit in on meetings with investment bankers.

Among his distinctions is his name surfacing in a bail hearing for Mario Condello, a Melbourne underworld figure accused of conspiracy to murder fellow Melbourne underworld figure Carl Williams. Condello, who was murdered before he could stand trial, was alleged to have threatened and assaulted Barros, although the judge did not take account of the allegation in his refusal to grant bail.

Liquidators were appointed to Winteray in August 2010.

For Energy Mad, the experience of those early years in Australia was an eye-opener.

"There was a series of very interesting characters - and I use that word very loosely - we came across in our dealings from about 2006 to 2008," says Mardon.

"It was an education, put it that way."

Since its public float and listing in 2011, Energy Mad has struggled to deliver on its prospectus promises. Last week it admitted full-year revenue was likely to be just $9.8m "because of delays in securing a further large United States order before the end of the current financial year".

Last September it said it expected 2013 full year revenue of $13m to $20m, compared to its initial public offer forecast of $21.3m.

Those missed forecasts have decimated Energy Mad's market value. From the $1 float price the shares have sailed firmly south and were trading around 35c last week.

This is hugely disappointing, but Chalkie has a soft spot for Energy Mad. Mardon and co-founder Tom Mackenzie are keen as cocker spaniels and have a mission to save the world's energy with their clever Ecobulb lighting products.

Several production problems delaying sales led to missed revenue targets, but Chalkie reckons the company would have been in a stronger position had its early Australian support turned out to be less flaky.

There's a lesson there somewhere.